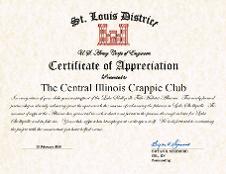 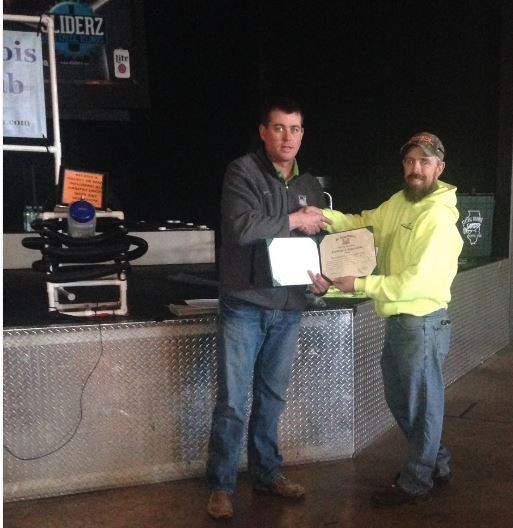 Jon Summers presenting Greg Foley, club president, with the letter of appreciation from Colonel Sizemore for our Habitat involvement at Lake Shelbyville. 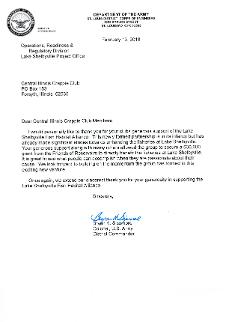 The Central Illinois Crappie Club participated last Saturday in the construction of 50 cube habitats to be placed in Lake Shelbyville. There were many volunteers and club members that participated and we thank everyone for their hard work. Construction started at 8 AM and we completed all of the planned cubes before noon, which was a record for construction of the 50 cubes. In addition to the participants our sincere thanks goes out to the Corps of Engineers employees and Mike Mounce of the DNR for their participation and direction. These “Mounce Traps” should provide all kinds of new cover for young crappie. Thanks Bud York for coming up with this appropriate name.

The cubes are planned to be dropped in the lake on March 17 in conjunction with the annual Christmas tree drop. This will be your next opportunity to participate in a habitat building activity.

With funds collected from the November 12th, 2017 OPEN tournament CICC was able to present a check to the Lake Shelbyville Fish Habitat Alliance for the amount of $500! Present were club members as well as biologist Mike Mounce, staff from Chip's Marine, as well as staff from the US Army Corps of Engineers including Colonel Sizemore. The funds will be used to purchase supplies to build more of the cubes and other structures that are being placed in the lake.

Watch the video to see the structures being placed!